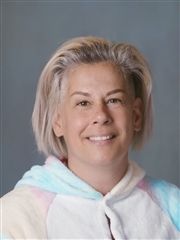 
My path to Montessori started out quite by accident. I moved from New York to Philadelphia for College where I received my Bachelors Degree in Fine Art. After my studies I moved to Minnesota and it was there that I was drawn to a small Montessori school.


Through my work in the classroom I noticed how peaceful and independent the children were in their environment. Their ability to organize themselves, socialize, express themselves and make decisions surprised me. These children were not only calm and independent but academically they seemed way ahead of their age. After four years I decided to leave but vowed one day when I had children I would definitely send them to a Montessori school.


In 2003, I was living in Delaware and I started looking for a school for my two year-old daughter. On our school tour I met Joanne from Admissions, and she asked me why I wanted a Montessori education for my child. My answer seemed to impress Joanne so much so that she told me to apply for a job. I did and was hired! After one year I had the opportunity to attend Montessori training and received my AMS Certification at the Infant/Toddler level from PCTE (Princeton Centre for Teacher Education) in 2006. I taught in Delaware until 2010 when I made the decision to move to Shanghai, China.


I worked at Montessori School of Shanghai for nine years. At MSS I had great opportunities. A fellow teacher and I created and implemented activities that focused on teaching Physics in the Toddler Environment. We presented our findings in presentations at AMS conferences, one in Houston, Texas, and one the following year in Philadelphia, PA.


I have also worked with TMEC (Trinity Montessori Education Centre) MSS training center as a Field Consultant to new teachers and Workshop Presenter for both Art (Infant/Toddler and 3-6 y.o.) and Movement (Infant/Toddler). I have been a mentor to many of MSS Toddler & EC Guides.


In my spare time, I am a fine artist and have had many shows in Shanghai. MSS saw my passion and asked me to create an art program for 3-6 year olds that would follow the core ideas of Montessori. The program grew to include culinary and woodworking.


In all these vast experiences and programs what excites me is encouraging children to explore. Helping children to learn confidence through being independent builds their self-esteem. I hope to create opportunities for your child that encourages that spark of curiosity and instills a sense of wonder in the world and its people.


This next school year marks my second year at Athena Montessori Academy. I was blessed last year to have the most amazing families that helped my transition back into the Tots environment magical. I love being in the classroom !